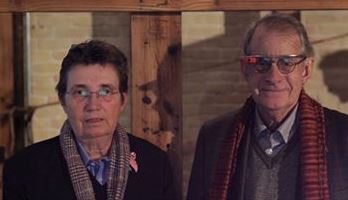 I read in an article the New York Times the other day that the age of gadgets, of people doing start-ups to make hardware stuff, is waning (as opposed to apps that work on the all-purpose gadgets we have). This picture is from three years ago. We went to a reception where you could try (and buy!) Google Glass gadgets. You can see that FFP is trying them out. I couldn't because they were for right-eyed people only. So, Google Glass? Not so much any longer.

I have bought so many gadgets, especially if you count cameras. There were calculators including one that did hexadecimal and octal and could be programmed. There were many cameras, different types of film and then digital. I bought many external drives, scanners, printers, special keyboards, mice and other input devices. I bought a little gadget that you could plug books into. (I specifically plugged in foreign language dictionaries and seem to remember one gadget that was, simply, a French translator.)  I avoided some standalone gadgets, though. I waited for cell phones to have GPS and didn't buy a Garmin. I never bought a portable DVD player (although I bought many VCRs and DVD players). I never bought a digital picture frame. At least not for myself. Way, way, back there I remember a special little calculator gadget for balancing your checkbook. I think I gave these as presents.I had a Palm Pilot, With that silly set of shorthand marks you made with your stylus to write.

I never bought a Go-Pro or a drone and think that ship has sailed. I think I bought portable game devices for the great nephews or my money did.

Now I'm going to go look for those language translator gadgets. How worthless is that when you could probably download slick stuff on your phone and tablet and computer and, of course, surf the WEB?

What's your funniest gadget story of the past or present ? Do you ever long for the days when we travelled with paper maps and a compass. (I have a couple of those, too. And not just the one on my iPhone.)
Posted by LB at 12:30 AM