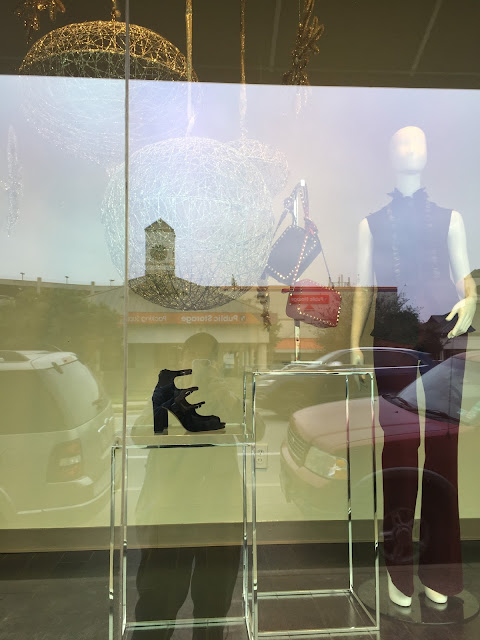 Pet Peeves? Trivial things that bug you when people are fleeing bombs and scrounging for food in other parts of the world. Yep, I've got them. And I bet you do,, too. I try to laugh them off, though. I read my newspapers. A story about a starving teenager who died after eating poisonous roots in Venezuela or a Middle Easter family trying to assimilate in the U.S. after fleeing and spending years in a refugee camp, that's the perfect antidote to the trivial things that irritate me. Still, I think I'll write about them!

Let's start with fashion, given the photo. It's a reflection of me in loose-fitting jeans, a jacket, and cap.The shop is a fancy one on West Sixth Street called Julian Gold. Look at those shoes! Here is my attitude toward fashion: I try to dress neatly in uni-sex style. I want to be comfortable and not look too out of place. Not to say that I don't like fashion. Just on other people. I like a great variety of clothing on others, men and women. Although...

Let's talk about purchasing jeans that are already ripped. I'm OK with ripped jeans, but wear them out and let the denim slowly fill the lint trap in the laundry. Personalize them. This is a really popular thing right now, the ripped designer (and no doubt expensive) jean. (Unless it's already on its way out. I hate the keeping up part of fashion.) I do like runway shows, though. Great theater. Just don't asked me wear 99% of what's shown. :)

Yes, I put a sideways smiley face up there at the end of that paragraph. A colon followed by a close paren. I don't really like emoticons. Even less do I like emojis which are actual pictures. Use your words, people. Type out pizza or merde. Oh, maybe it overcomes language barriers, but, on my phone, they are mostly too small for my old eyes to make out. So, if you are really on a car trip driving through saguaros don't put a car and a cactus emoji. Just say you are driving to Marfa or something.

Oh, Marfa. Oh, all the places that hipsters go where I don't really see the point exactly. Especially Marfa. But also Santa Fe and Aspen a little bit. Sigh. I'd actually take being in downtown Austin over a lot of these places. Where I lived for eight and a half years.

And, yes, I love living downtown. But I'm tired of being asked over and over: "Do you like living downtown?," "Where do you buy your groceries?," and "Don't you hate the traffic." I've been here over eight years. If I hated it, I think I'd find a way to move. I buy my groceries at (1) the deli in the building; (2) Trader Joe's which is 100 yards away; (3) Whole Foods (which is 1/2 mile away); and (4) all the same places you buy them (Costco, big grocery stores) when I'm out in my car which, thank you very much, I don't have to do a lot SO the traffic doesn't bother me nearly as much as it does others! I don't ask other people "How do you like living here and having to drive downtown in the traffic to see just about any live show?" I don't ask them if they mind having to drive every single time they want groceries because they cannot walk to any place to even get a six pack. But I might start asking these questions. Maybe just on social media, though, and not at parties and such so as not to make a scene.

Ah, yes, social media. I love Twitter and Facebook. But I don't love the attitude and baiting. But, also, more trivially, I don't love memes (I don't really like the word either). Especially memes that are just a picture that is really words. A poster with words to be big on the social media and get attention. I despise those memes that say "I'm about to drop some of you who won't read this to the end, copy it to your feed, etc." Oh, please do! Drop me, that is. I love it when someone expresses their own thoughts, takes a picture of the kids and dogs (even the adults) or generally marvels at what is going on around them. I am moved when you mourn your relatives or pets. However...

We all know Carrie Fisher is dead. Genuine news outlets have reported it. The year 2016 did not take her or any of the other unfortunate celebrities who passed this year. Leave it to the Academy Awards and such for the tributes. Unless you have a 'me and Carrie' story. That would be interesting. (Although, yeah it was too bad. She was only 60. And I just saw that my own husband shared the story. So there you go. He did so to say what a great writer he thought she was as well as an actress. So, OK)

I'm sure I have other pet peeves, little things which don't matter but, in the moment, make me forget that I'm well-off, well-sheltered, well-fed and don't hurt anywhere at the moment. There is the way millennials cross the street oh-so-slowly when I'm waiting for them at a stop sign (even when they aren't buried in their phones). There's the way, when I'm the pedestrian, that cars occupy the crosswalk I'm using even though I'm trying to get out of it much faster than the average millennial. (Granted these behaviors aren't every millennial or every car, but still, irritating.)

But, I'm off to a movie. I'm walking there, not driving. I'm sure I have some pet peeves about movies or their audiences. But I'm oh so lucky and who am I to complain.
Posted by LB at 1:38 PM