Here's to a Random Slide Show

In 2000 I moved my parents to Austin. I say I "moved them" to mean I had purchased a house for them to 'rent' from me and encouraged them to sell theirs in a Dallas suburb and move into it. My mother had been bugging me about things that she wanted. A new VCR, cable TV in her bedroom, a computer, a CD player. There were probably other things, too. Things with user's manuals. But I still worked and they lived over 200 miles away. The thought of remote troubleshooting of anything felt like a lot of work. One way I encouraged them to move was by saying that she could have any of this if they moved. I lived fifteen minutes from the house I'd purchased and worked five minutes away. I can keep things running for them, I thought. (Of course, I thought I could look after them if they got sick. That's another story for another day.)

They did move and Mom even got a computer. She couldn't remember how to surf the web and got confused using her email but she learned to use paint all by herself by looking at the HELP tab. When I set it up, I loaded up a ton of pictures and made the screen saver a random shuffle of these. She loved it, seeing pictures of family and friends flash  But, I confess, I love me a random slide show, too. On the computers on my desk, I have hundreds of pictures. Most digital. Some scanned. Most I shot or my hubby did. But some are stolen from the Internet, particularly eBay. Some I scanned from my mom's collection.

As I type this the other two computers are displaying pictures from these big collections.

There's a picture of my husband taking a picture of some busking musicians in Central Park, there's a junk store window reflection (I'm very fond of reflections especially of shop windows), See below. 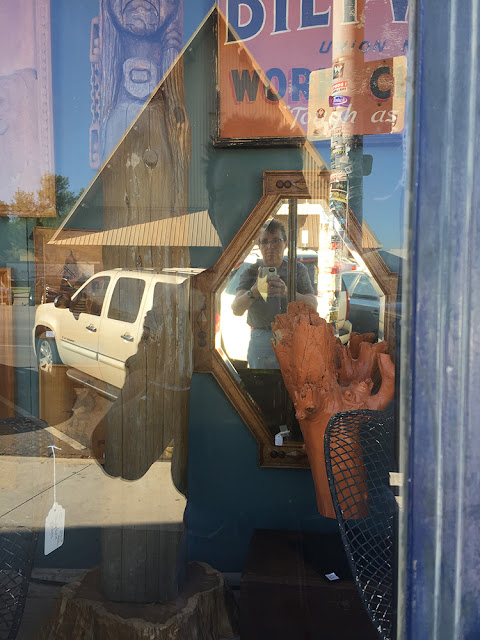 There's a picture of a stack of books. There is a snap of a shelf with some collectibles I have (or once had).

And there's a picture of a woman reciting from James Joyce's "Ulysses" at the New York Bloomsday. There's Colum McCann. Ditto. There are oysters roasting on an outdoor fire at a house on the Oregon coast. And a picture of the Zilker Park Kite Festival. There's an image of one of the many Manhattan Cocktails I've consumed. There's a picture from high up in the current tallest building in Austin. There's FFP by the Ignatius J Riley statue in New Orleans.  There's a picture of my friend Scott at an AIDS walk kickoff. There's the Space Needle in Seattle. There's a picture of books in a Little Free Library.

There are geese and ducks. Turtles, egrets, cormorants, swans.

An Elvis lamp. Murals and sculpture. The Barbara Jordan statue at the Austin airport. Graffiti. Marchers in parades, motorcycles in parades. That's obviously a New Orleans French Quarter scene. Sunsets and sunrises. Jazz musicians and backstage pictures at the "Nutcracker." Details of chrome on antique cars.

There's my dad (seven years gone) holding a baby who'd now be in her forties.My niece. There she is grown with her first child as a toddler (now 16). Large group pictures taken at holidays.

You get the idea. I can waste hours looking at these images. Randomly shuffled. Crossing years and miles apart. Challenging myself to remember where they were taken and why. Thinking briefly of the ones who have passed, people and pets, who appear for a few seconds. And the babies who are now grown and have had babies who are also grown or almost so.

I often feel better about it all when I consider life a random set of images and feelings instead of something we plan or control.
Posted by LB at 12:30 AM