I've been married to my husband (FFP) for over forty years. But I've known one friend I met up with today even longer. The other three ladies at this somewhat every year gathering (we couldn't figure it out last year) I have known for a long time as well. Decades.We all became friends somehow. I worked with two of them. The friend I've know the longest in the group was a workmate in the early seventies, before I moved to Austin and met FFP.


Yes, I met LG at work. (Her name is Linda, too. Hence initials. I go by LB a lot. Too much Linda confusion.) She and I went to the same college. I didn't know her there but met her when she interviewed for a job at the company where I'd landed after I graduated. She got the job and we became friends. She'd gone to Europe the summer after she graduated, I think. I was envious of this. We both made friends with a guy ten or fifteen years older than us who was a true Europhile and travel maven. I think these two (and the mind-numbing job with no future) inspired me to quit that job in 1972 and, armed with a three month Eurail Pass, a miniature camera and some clothes and a small amount of money, book a flight on Icelandic Airlines for Luxembourg. That trip is a long story for another day, but when I returned I got a job again, but at a new place. My friends at the other place and I stayed in touch. After I quit that next job to take one in Austin and before I moved, my friend LG and I went to Europe. Also, a story for another day along with the other trips and meet-ups I had with her over the years. 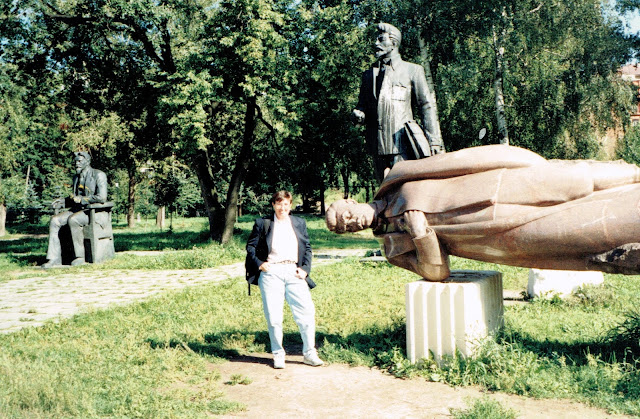 Another friend at the meetup today, Pam, I met through LG. LG ended up in the LA office of the company where we worked together. Pam worked there, too. (They had escaped the era where this company never promoted women by sticking around.) They became close friends and travel buddies. They were both laid off from that company after years there, I think. LG ended up spending a year in Berlin and then, in a crazy twist, getting a job at the company I was working for in the last years of my career. So LG moved to Austin, but still spends time in LA with Pam and traveling with her. Pam visits Texas for the holidays, Hence this meetup we try to do each year between Christmas and New Yera's.

Another friend, Deb, I met on an airplane flying into Austin in the '80s. We were both on work trips and had seats next to each other. We determined that we both played tennis and that we only lived a couple of miles apart on the same street. She took my phone number but never called me. I told FFP about it and he determined her number from my knowing her name. He used the phone book. Remember phone books? We ended up getting together socially. After a while, we realized we had the same birthday and that our mothers had also had the same birthday although she was a year younger and her mother had been a year younger than mine. Her mother and father had died young and Deb became close to my parents. (Who never met a friend of mine they didn't like.) Deb wasn't married and her nieces and nephews kept coming to 'visit' and staying for a long while. Then Deb got married. in our backyard when we lived in the big house. Deb visited my mother in the hospital after her Multiple Myeloma was discovered in the few months between diagnosis and her death. Four years later Deb was diagnosed with the same cancer. She is a 10-year survivor, but it's been a long struggle. I don't think we've taken any trips together, but we've had many adventures around town.

The fourth friend at this lunch is my friend SuRu. (Letters from first and last name.) We became friends when a mutual friend was living in UK and sent a box of presents home to me but didn't want to send SuRu's gifts to her and included them in my box with instructions to deliver them. SuRu and I have been pals for years. We've done some traveling together, too. 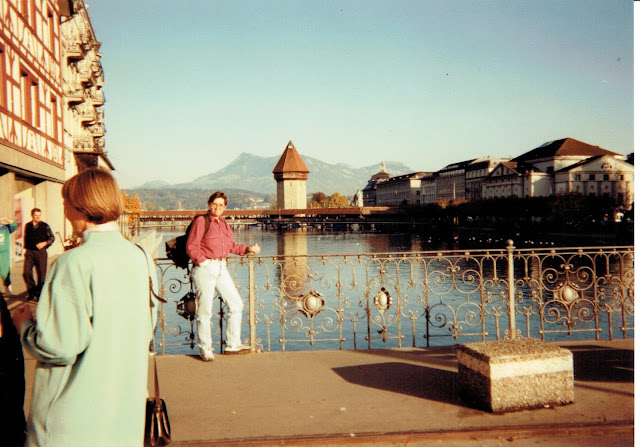 SuRu took this picture of me at Lake Lucerne back in the 90's I think.

We've grown old in these decades. The oldest in 70 and the youngest is 62. Only the youngest still works. We told stories from our lives over lunch and worried about world events. It was good to see everyone. I took everyone one of my greeting cards and wrote a little note to go with it. I need to get together with them separately and catch up even more. I doubt I'll ever do any travel or meet-ups in distant spots with any of these gals again nor will we have any of the more adventurous activities of our past. But we have lots of memories.And I'll cherish them as long as I can remember them.
Posted by LB at 4:24 PM